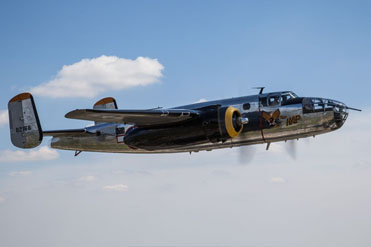 The B-25-NA SN 40-2168 now flying as "Miss Hap" was completed on February 1, 1941 and delivered to the military on February 25, 1941. She was the first B-25 assigned to the 17th Bomb Group assigned to the Headquarters Squadron carrying the Squadron number 1. While with the 17th Bomb Group, she was used in training exercises at McChord, Pendleton, Felts, and other locations, including the Louisiana Maneuvers. Her service with the 17th ended shortly after the United States entered the war and she was assigned to Orlando Field, Florida for evaluations and administrative duties. She was involved in a taxiing accident on November 11, 1942 at Aberdeen Proving Grounds, Maryland while being piloted by First Lt. H. J. McIntire. On July 16, 1943, she was returned to Inglewood for conversion to a transport to General Hap Arnold, Chief of the Army Air Forces. Modifications included installation of a bed over the bomb bay as well as sealing the bomb bay doors closed and installing luggage compartments in the bomb bay. Additional passenger seating was installed both ahead of and behind the wing roots and a lavatory was installed at the end of the aft cabin. A solid nose was installed making room for more electronics and an improved heater and the escape hatch was modified for easier exit. On February 21, 1944, she was involved in a landing accident due to mechanical failure at Bolling Army Air Force base while Homer C. Munson was the pilot. She was retired from military service in 1945. The following summary of assignments are listed on her record card:

On January 22, 1947 she was sold to Charles Bates of Chattanooga, Tennessee and a ferry permit issued under an assigned Mexican registration of XB-GOG. The aircraft was kept in the United States and assigned NL75831 in April of that same year. In 1948, was sold to Bankers Life and Casualty Company from Chicago, Illinois. At this time she was flying as "El Jarocho". From June of 1951 through June 1962 she was owned by Hughes Tool Company in Houston, Texas. Howard Hughes used it for corporate activities. In June 1962 was sold to Acme Aircraft in Lomita, California. The registration was cancelled in May of 1965 as she was reported as salvage. In October 1966 she was owned by Aero Service from Wichita Falls, Texas. The registration was changed to the current N2825B that November. She was sold back to Acme Aircraft in January 1967 and was there until August of 1971 when she was sold to John Silberman from Savanah, Georgia. By October 1974, she was sold to SST Trust Company in Cypress Gardens, Florida. In February of 1977, she was bought by Grover Summers from Winter Haven, Florida and Samuel E. Pool, from Lake Wales, Florida. She was sold in August of that year to Charles Miller from Mobile, Alabama. She stayed with Charles until July of 1983 when she was sold to Flytex Inc. of Dallas Texas and then sold to Francis Clark in October of that same year. In April of 1982, she was one of 4 B-25s in Washington DC for the 40th anniversary flight to honor the Doolittle Tokyo Raid. She was transferred in December 1983 to Fighting Air Command from Dallas, Texas where her modified solid nose was replaced with a standard greenhouse nose. At this time, she was operated as "Proud Mary". She was sold in October of 1989 to Courtesy Aircraft from Rockford Illinois and then to TBF Inc. of Tenfly, New Jersey. As of 2002, she has been operated by the American Airpower Museum in Farmingdale, New York and flown as "Miss Hap".